Hello welcome to the third of my previews ahead of this years IPL. If you didn’t check out the other two on the Chennai Super Kings and Delhi Daredevils then please go check them out let me know what you think. Today we look at Kings XI Punjab. The Kings are captained by R Ashwin and coached by Brad Hodge. Despite being in every edition of the IPL they have never won the competition ending up beaten finalists in 2014. Since then though there has been a poor showing finishing bottom in 2 of the last three years. Kings fans will hope this is the year the team starts to look up. 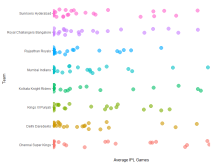 The first thing that stands out in the graphs above is that Kings have the second smallest roster. I have changed the average age graph to now plot each individual players age rather then just the average. For Kings you can see that most of their players are within a tight range however they also have two of the oldest players in the league. When you review number of IPL games they are one of the least experienced teams in the league. Most of the squad is on the lower end of the graph therefore experience could be an issue for this squad.

On the face of it this looks a formidable batting line up with a number of players in the high run rate long innings category and high strike rates in general. This could mean the kings will be high runs scorers particularly in the top order and it will be fascinating to see this batting line up in action.

Now on the face of it the all rounders look OK however when you consider the Kings apparent best all rounder has never played an IPL game and that record is from the lower twenty 20 competition in India, Things don.t look so good. Overall I don’t think this is the strongest area of the squad though generally the bowling does seem pretty economical.

The bowling attack for Kings seems to be the weak spot. Despite the bowling attack being the area where most money was spent it looks clearly weak. Although it general seems at the lower end of the bowling average the attack definitely looks to have in general higher economy rates.

Overall I think Kings have a formidable batting line up however an equally weak bowling attack. Therefore i would watch out for the Kings as their matches could be some of the most exciting games in this years competition.