Hello i’m back with the next preview for this years IPL. As i say in the start of all of these posts its part of a series please go check out the others let me know what you think and your thoughts its definitely going to be an exciting league this year.  Today we are covering the Rajasthan Royals a team with a chequered history. They won the league in the inaugural year in 2008 but since then its been poor performances on on the wicket and controversy off it, (Rajasthan were expelled for two seasons). Already this year they have lost their captain Steve Smith so are lead by Ajinkya Rahane.

Overall for number of players Rajasthan have the third smallest squad however its pretty similar to some of the other squads therefore I don’t think its an issue. With regards to ages there is a good grouping around peak age as well as a few players at the top ages which will be helpful. Experience is where it starts to go a bit downhill for the royals with clearly the least experienced team in the competition. 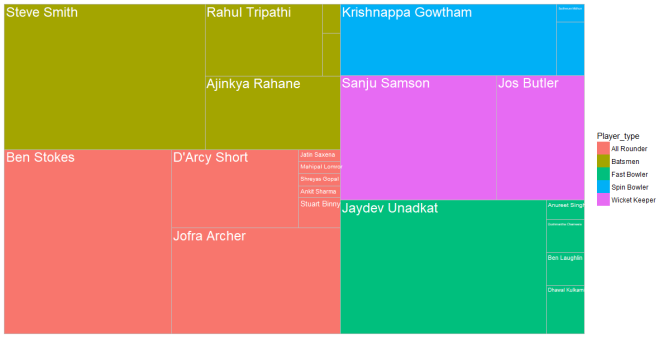 The treemap shows that the Royals have spent big on a number of key players. In all categories. One of the key players in Steve Smith will not be playing therefore that leaves a big hole in the batting line up. They will be hoping that the big money spent on all star all round Ben stokes can help overcome his loss. Its clear the Royals have spent big then filled the rest of the roster with cheaper players to supplement the big players. 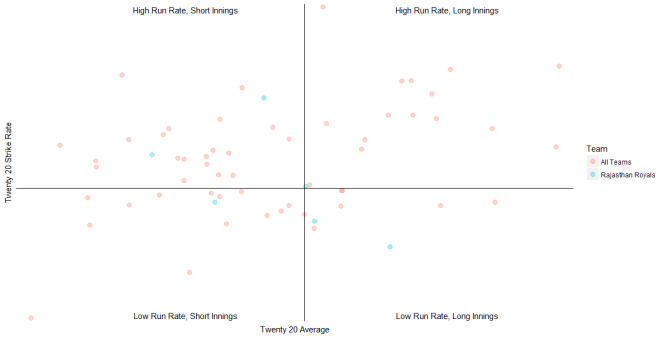 Unfortunately the batting when viewed the same way we have viewed all the other teams so far looks pretty weak. Especially when you remove Steve Smith from that line up.  They have a couple of batsmen with decent strike rates but no one to play the long innings. This could mean they struggle post big totals or chase big totals down. 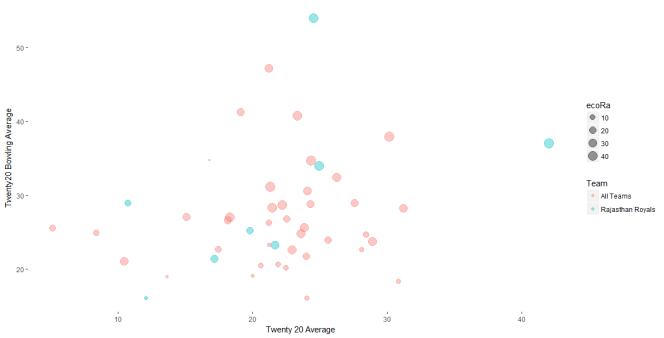 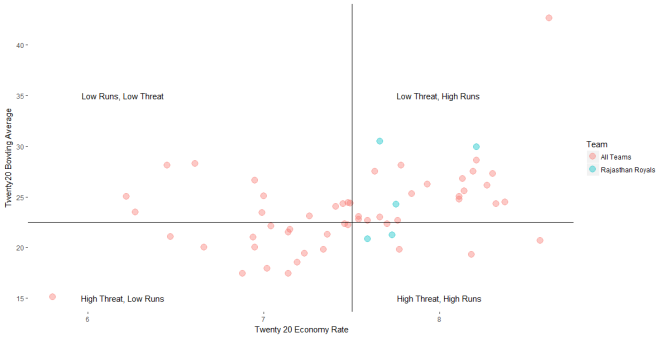 The bowling attack could be the weakest area of the team. The whole attack is the the right hand side of the graph which means they could be conceding a lot of runs. Therefore without the batting line up without Steve Smith present could be struggling to chase down runs.

In summary I think that despite there obvious strength with all rounders, the weak batting line up missing Steve Smith and the poor bowling attack could mean the Royals are in for a season of struggle.