Group D is next on the agenda for us to take a look at in this series previewing the world cup. This is part of a series looking at all the groups in the World Cup so please takes a look at the others and let me know your thoughts. Group D contains Argentina, Croatia, Iceland and Nigeria. So let’s take a look at the age make up of the 4 squads 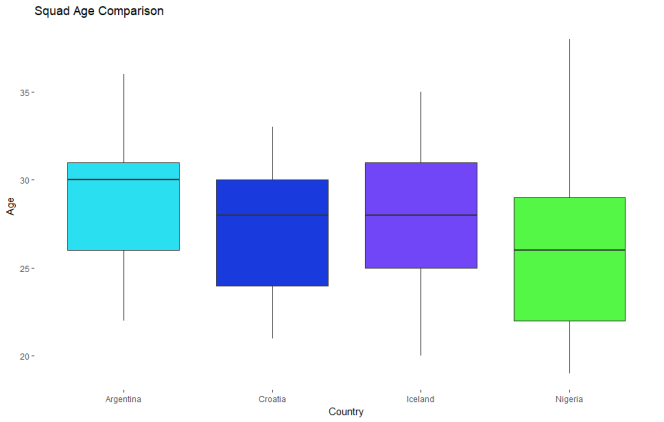 Argentina has one of the oldest medians we have seen so far and it looks to be about 30. Does this mean its this squad last opportunity to win the world cup? Lionel Messi will no be around forever and this is probably his last chance. Both Croatia and Iceland have similar medians which are around the area we have seen most medians so far in this preview series. Nigeria has a relatively young median age however interestingly they have more players over 30 then Croatia and Iceland. 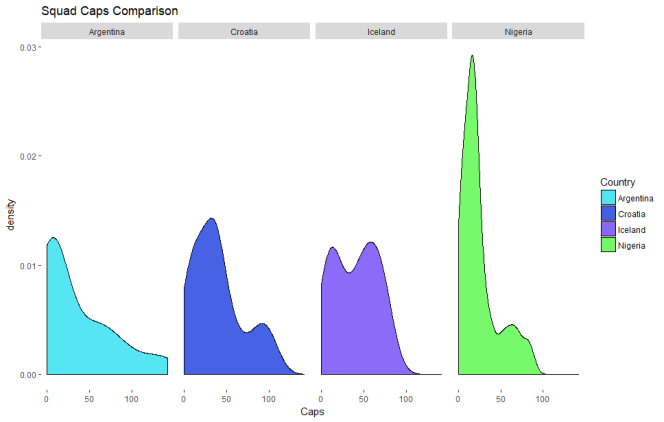 There seems to be a big correlation between Nigeria’s relatively young squad and it seems to have the lowest amount of caps. Croatia seems to have a relatively experienced squad with most players having more then 25 caps this should stand them in good stead in the tournament if the experience is a key attribute to any good squad. Argentina caps seem to be evenly distributed across all of the range, they also seem to have the most amount of players above 100 caps. 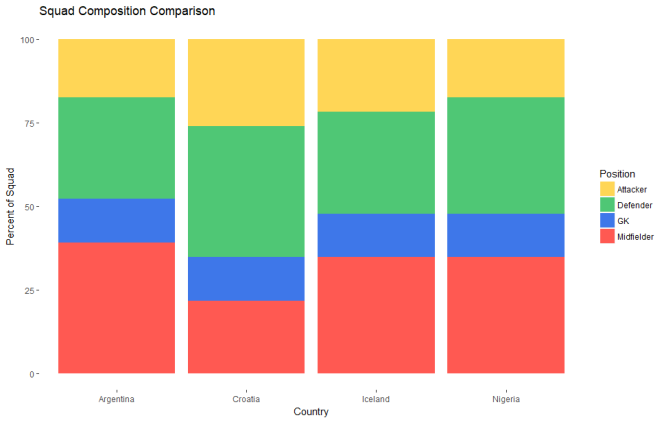 Next, we review squad composition for the 4 teams in group D. All teams in this group seem to have varying amounts of all different departments in a team. Whats surprising is Argentina seem to have the least amount of attackers however the attackers they do have are all world class and it’s going to be difficult to fit them all in the team. Croatia seems to have the most amount of defenders which could mean they are strong defensively. Iceland and Nigeria have a similar makeup in their squads with only a slight difference in attackers and defenders. 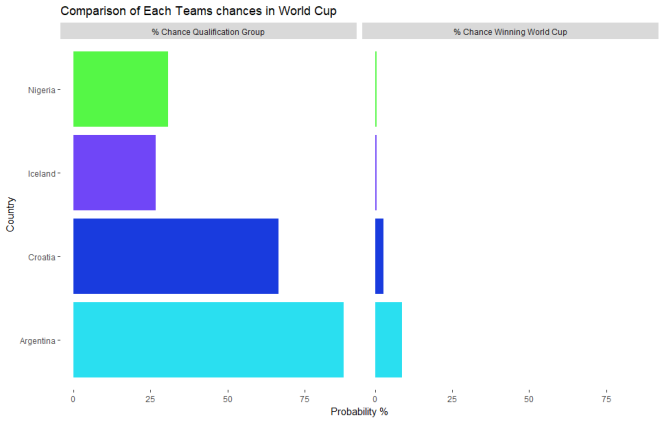 Finally, we look at the chances of each team in the tournament based on looking at chance from implied odds. As you can see this group is expected to be pretty easy for Croatia and Argentina. Iceland and Nigeria look expected to be quite evenly matched teams but are not expected to have any impact on the group. Looking at the chances to win the competition Argentina are one of the big favourites unsurprisingly. However, it also looks like Croatia are seen as having a good outside chance so will be interesting to see how they do in the competition.

That’s it for today’s group D overview please let me know your thoughts in the comments below and check out the other previews.