Welcome to today’s blog, these are all part of my series looking at all the team in the tournament group by group. Check the others out if you haven’t already and let me know your thoughts. Today is our second last group and it is group G which contains Belgium, England, Tunisia and Panama. As an Englishman myself hopefully this world cup doesn’t end up with a penalty shoot-out heartbreak.

As you know if you have read the other blogs we start with the age comparison first. England looks to have overall one of the younger squads in the competition. Not many players at peak age, therefore, it could be a tournament too early for this group of England players. Belgium on the other hand look to have the perfect squad makeup with most players at peak age suggesting this tournament is at the correct time for their golden generation. Panama has possibly the oldest squads in the group but also players of all ages. Tunisia squad is generally just slightly older then Englands.

Looking at the caps breakdown for all teams within group G. Belgium are showing the common trend of the squad being split in two with having a group of younger players will low caps but also a group of players with experience that can guide everyone. England probably has one of the squads with the lowest total caps we have seen in the tournament this strengthens the view that this might be a tournament of building for England. The positive is England don’t have many players with the baggage of the last world cups. Tunisia seems to have a similarly inexperienced squad as England which aligns with its also low squad average age. Panama has the most experienced squad in the group with a lot of players with over 100 caps. 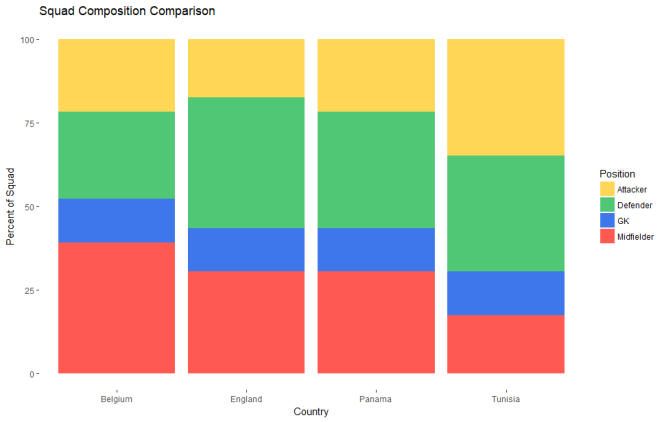 Now, let’s take a look at the squad compositions and first things first it looks like Tunisia have abandoned the midfield. I don’t think a team in this World Cup have had a lower amount of midfielders then Tunisia. They have plenty of Defenders and Attackers so should be interesting to see how they play. Belgium has gone the opposite of Tunisia and gone with more midfielders at the expense of defenders and attackers.

Now finally let’s take a look at the chances of all four teams in this tournament. On the face of it, this looks an easy group with the top 2 already decided. However, because these are based on bookmaker odds England might be slightly over priced due to lots of expectant England fans out there. Looking at the chances for the whole tournament Belgium have a good chance, however, will they bottle it on the biggest stage again.