Today in the blog we are going to be looking at a method I have been investigating as a way of measuring how much a player contributes to there team in each game. Normally you might look at how many goals a player scores. Thats always the headline figure but players contribute in numerous different ways in ice hockey – assists, shots, hits, takeaways but also we can look at negative contributions to the team penalty minutes, giveaways, goals conceded.  These events can be given points values depending on, how common the event is and how key the even is to win a match. Therefore we can look at each player’s contributions in the games a look at which affected the result more.

The first thing I have to say is thank you to NaturalStatTrick.com for making the data available. This would not be possible without them. Also, this method does not include goaltenders – I think this is a separate scoring for so this is not included.

The table shows how i have initially scored the different events. At the moment this is just arbitrary how I value each event and how common it its. For instance, goals are the most important as without a goal its impossible to win a game of hockey. Faceoffs are relatively common and although could be key to scoring I have awarded them a low score. One flaw with this is currently is giveaways a giveaway in your own defensive zone is probably a lot worse than a giveaway in the opponent’s defensive zone. I have no data for the location of the giveaway so can’t include that in the scoring. Location data would be very useful to refine this model may be for the future. 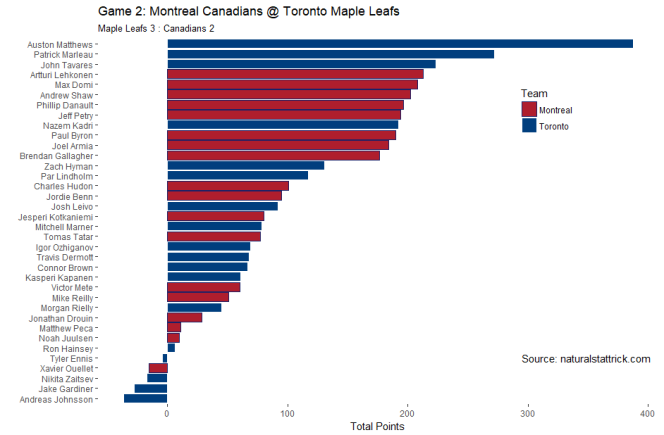 Above you can see a sample of the point scores for the first 2 games of the NHL season. Clearly, in the first game, you can see how the Washington Capitals forwards dominated the game in the 7-0 win. Also, in the second match despite a much closer game the Toronto forwards also looked to dominate. This is just the first explanation of the method and a quick initial look at  2 games. Things I will look at going forward: