Todays blog we are going to look at 2018 Formula 1 season and the numbers behind it. Particular the qualifying pace of each car. I have the data for each driver and cars fastest lap in qualifying. 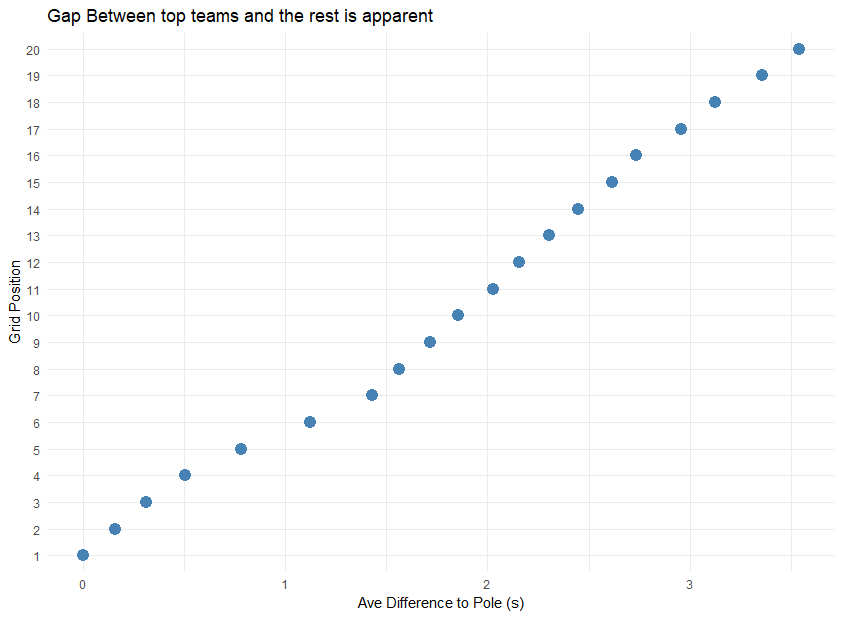 When we break the first graph into drivers and teams two things become clear. There is a big gap between the top 3 teams and the rest. There is also some fairly big gaps between team members. Pace-wise the closest battle was between the Renault, Haas and Force India. With all 6 drivers close together and mixed up.

Looking at how each teams difference to pole position trended over the season. Overall the Ferarri started the season as the quickest car. However, Mercedes out-developed them and was clearly the fastest car by the end of the season. The team that made the biggest improvement was Sauber going from one of the slowest teams at the first race to the fastest of the midfield by the end of the season. A bad season for the former great team Mclaren is shown they got rid of the Honda engine at the end of last season, however, the team that took it Torro Rosso overtook them by mid-season. Slowly they drifted further from the pace as the season went on.

Sauber’s improvement looks even more impressive, they have improved the car from being over 4% behind at the first race of the season to around 2% towards the end. This wasn’t driven by one driver being quicker than the other. Both drivers improved at similar rates though it was clear Leclerc was the quicker driver.

The closest teammates were the Red Bull drivers Verstappen and Ricciard0, the Renaults of Sainz and Hulkenberg and the William’s of Sirotkin and Stroll. For all the hype around Max Verstappen this season he has not been much quicker than his teammate. At the other end of the scale, the Mclaren and Sauber had the biggest differences between teammates. It was no surprise that Vandorne got dropped by Mclaren at the end of the season even though he was up against the great Fernando Alonso.

I hope you enjoyed this look at the season we had in 2018. Some interesting trends however its worrying the clear gap between the top 3 teams and the rest. Hopefully a closer season next year the other teams are able to close the gap.