Hello and welcome to the final of my previews for this years IPL. Please do go check the others in the series and let me know your thoughts and predictions. Who do you think has the best squad in the league this year? Today we are focusing on the Sunrisers Hyderabad who were founded in 2012. Since then they have won tournament once in 2016. They are now captained by Kane Williamson and are coached by the Australian Tom Moody.

Sunrisers have the second biggest squad in the league which should give them an advantage if any of the players lose form or they get injured. Its also a very well balanced age squad with not many young players. Finally looking at the distribution of games played in the IPL they have a number of key players with lots of experience. One of them though is David Warner, not playing this year due to the fallout from the ball tampering scandal.

Looking at the treemap its clear that the team spent most of its money on batsmen and fast bowlers, there is relatively little investment in all rounders. Sunrisers have also invested big in the Afghanistan leg spinner Rashid Khan. Him and Bhuvneshwar Kumar will be the key members of the bowling attack. 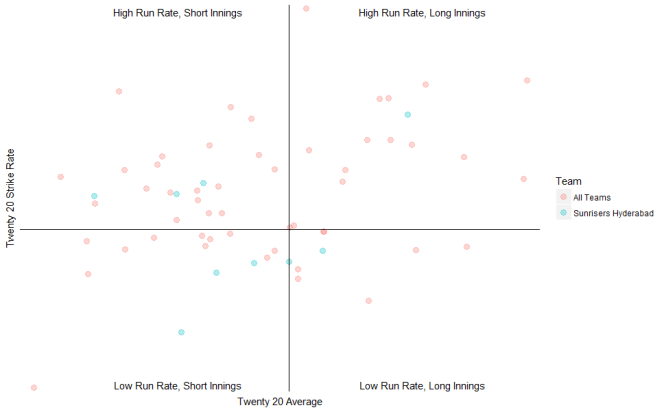 Overall the batsmen look pretty weak. This is because they are mostly on the left side of the graph. One hope is their relatively strong levels of strike rate however the issue is the batsmen may not stick around long enough to get going.

With the all rounders the news gets a little bit better. Despite the low outlay in players a number of them appear to have good batting and bowling stats with good economy rates. This looks to be impressive work getting good players for the low outlay they had.

The bowling department looks to be the teams greatest strength. They will be hoping two of the best bowlers in the competition Kumar and Rashid live up to their past performances. They will need to if the Sunrisers are to be sucessful.

Overall I think this is a well balanced squad though i think the absence of Warner could be too big a void to fill.