Hello and welcome to another of my IPL previews today’s is looking at the Kolkata Knight Riders. If you want to look at the others there all in the blog so go and check them out. The team from Kolkata have been in the competition since it was founded and won the tournament in 2012 and 14 under the stewardship of Trevor Bayliss. Since 2016 Jacques Kalis has been the head coach. They will be hoping to go further then the play offs this year. So lets dissect their squad see if that might be possible.

The first thing that stands out is that the Knight Riders have by far the smallest roster in the competition. Will this cause issue an issue if players are out of form or injuries. Loking at the average ages for the squad it looks like there is a good spread of ages and also experience of the IPL which should stand them in good stead.

The treemap above shows each player in the Kolkata squad with how much they cost in the IPL auction. What stands out that in three key areas of the team they decided to spend big one name. This should mean they have a spine in the team of top world class players and therefore Kolkata could be a team of seeing how the other players play around the top players.

Overall the batsmen are generally high strike rates which will give them a good chance of scoring good runs. They seem to be lacking in batsmen who will stick around however the two batsmen they have that will do that could allow the ones with the higher strike rates to play around them. This therefore could be a well balanced batting lineup.

on the all rounder front there seems 2 out of the three all rounders are much more bowling all orunders then batting. This will therefore strengthen the bowling attack more then normal all rounders at the expense of the batting line up. 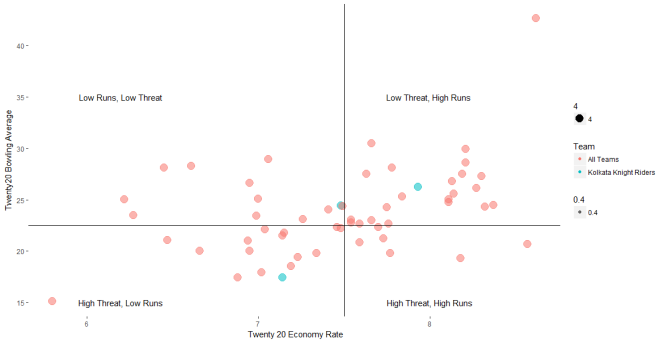 Finally we look the bowlers, in which Kolkata’s big problem is shown. To start with there are only 4 bowlers in the squad and only three of them have a twenty 20 record. When you add in the fact their top bowler, Mitchell Stark, is currently out injured and probably wont play in the competition. This could then mean the team lack the required firepower in order to win matches. It is also where having a small squad is going to hurt them as they dont have many options for replacement.

In summary I think despite what appears to be a well balanced batting line the lack of numbers for all rounders and in the weakness in the bowling attack could mean Kolkata are in for a struggle in this years competition. It will be interesting to see what they do to cover for Starc and times ticking for them tov come up with a plan as opening game is less then a week away as i write this.